How Hollywood Movies skew our view of relationships.

My cynical look at how real life doesn't match the movies very often. If only real life were like the movies..sigh.. The Supercouples in the movies never have problems like WE do.. well, they have different problems, but how would these lovers handle an unplanned pregnancy?
For example..


What comes to mind when you think of these couples? Passion, romance, drama, desire, sacrifice, electricity, devotion! You think of ‘TRUE LOVE’, in capital letters. This is the standard set before us, of what real romance should be. This is what we hope for, thinking real life CAN be like the movies.. We hope that our lives can be filled with that passion, that desire, that depth of 'true love'.. There has to be more to life than just going to work every day, doing the laundry, cleaning the bathroom, right?

So we look to find someone who will ‘love US like that’. We know there is someone out there meant ‘just for us’, the perfect significant other, who will think we are precious, special, valuable, and will do anything for us! Someone who will be there through thick and thin, through good and bad, someone who will care for us, and take care of us, no matter what!

Then, when you fall in love, that unmistakable rush of emotion hits.. You’ve finally found him! Your true love! Every minute with him is timeless, you can’t wait for the next one. He’s practically perfect, he seems divine – and he says he feels the same way about you!!. You’re really in love, with the man who loves you, just like in the movies.. The grass seems greener, the sun is brighter, the birds are singing beautifully! The passion is there, the steam, the desire to be with this man all the time, to touch him, to hold him, to kiss him.

As you lay in his arms, content and happy, you think of how lucky you were to find ‘the one’. How secure you feel, knowing that nothing could ever happen that would be too difficult for you two to handle. Just like in the movies, no matter what comes up, he will be there for you. No Evil Empire too bad, no Iceberg too big, no Overbearing , Overprotective Family too difficult, to keep these lovers apart!

What would Han do to save Leia, if she was in trouble? Anything… What would Jack give to save Rose? Everything… What would Romeo do for the love and life of his Juliet? Same as above... So we have these examples, and we hope that this is what real life can be like.

Now imagine if the woman in any of these Supercouples became accidentally ‘pregnant.’ What would the man’s reaction be? There’s no doubt, in the world of ‘True Love,’ that even though the pregnancy might be unexpected, these men would be happy. After all, the woman they love is going to have their baby!

These men would be mature enough to realize that one possible side effect of making love is that the woman becomes pregnant. The man would have thought this through ahead of time, and would have discussed it ahead of time! Even though it was not planned, we know those men would react with Hollywood Happiness and Joy!

They would take the woman they loved into their arms, kiss them passionately,(as the romantic music plays in the background) and say "Darling, this is the most wonderful, unexpected surprise! This may make things harder, we may have to change some of our plans for the future.. But you being pregnant with our child is a precious and wonderful thing!"

The problems would still be there, the challenges strong, but for our movie heroes and heroines, it would all be okay in the end. But…..it seems that real life does not always turn out like the movies. (Surprise!) This is so disappointing for us women, who were doing our part of the true love deal. We push to shape our physical attributes to resemble those movie women, we try and follow their brave, gutsy examples..yet somehow the men don't seem to be doing their part...

So I present to you the following conversations, for a cynical, comical look at what the "SuperCouples" would do, if they were living in ‘our’ world. Even though these dialogues are 'made up', they are based on actual conversations that women have shared with me, about their experiences with unexpected pregnancies..

A long time ago, in a galaxy far far away….. 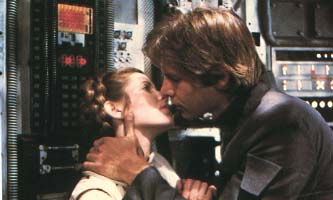 It's now the future, after the Jedi's triumphant return. Han and Leia are in love, and planning to get married, but for right now, they are cruisin' around in The Falcon. This week, The Falcon is on a cargo run to Mos Eisley.. Han is at the helm, trading chit-chat with Chewbacca. Leia comes out of the bathroom, looking a little grey.

"Han" says Leia, a little weakly, "How long ago was it that we spent that weekend in the Dagobah system, on vacation?" "Oh, at that great beachhouse?" Han answers, without glancing up from the helm. "About 7 weeks ago..why?" Leia doesn’t reply, just puts her hand to her stomach, as her face blanches to a pale shade of green.

She rushes back into the bathroom, and throws up again. Chewbacca looks at Han, and roars quietly. "No, Chewie, it can’t be the fish, I ate it too, and I feel fine!" Chewie tilts his head and roars a different sound. Han’s head whips around to look at Chewie.. "No.. " he says slowly.. "That can’t be!"

"Leia!" Han jumps up and rushes to the bathroom door. Leia is rinsing her mouth, still that lovely shade of green. "You’re sick, right?" He asks worriedly. "You’ve just got the flu?" "No Han", she replies, "I think it’s a little more serious than that." Chewie roars again in the background. Han hollers over his shoulder: "Shut up, Chewie, she is NOT pregnant!" He looks back at Leia, smiling hopefully.. "I think I am" she replies softly.

Han spins around, walks a few steps, then comes back. "How did this happen?!" Han yells.. "Don’t yell at me, you KNOW how this happens!" Leia yells back. "No, no," Han says, annoyed, "I know how this happens, what I mean is how did THIS ONE happen?" and he points at Leia’s stomach.

Leia turns around and promptly throws up into the space commode again.. Han rolls his eyes.. "Great, just great. Now what are we supposed to do?" Leia shoots him a look, and continues "I am as surprised as you by this. I wasn’t intending for this to happen either." Leia rinses again, and then looks at Han quietly.

"Han, you know that this is a possibility that might occur when two people have intercourse." "But I thought you were on something, you know, to stop that from happening!" he whined. "Obviously" she states, "It’s NOT 100% effective.. " "Well," Han continued,"I guess we can see what Doctors are around in Mos Eisley.." "What??" Leia says, stunned. "You didn’t think we could keep it, did you?" asked Han.

As Leia looks in disbelief, Han continues "Leia, you know the Falcon is a small ship, we don’t even have another bunk, and she’s getting old, and going to need more repairs soon, and how can we be taking a baby around Space all the time? They need to be on the ground, and in school.." "Han!!" Leia interrupts "This our baby you are talking about!" "It’s not a baby yet," he protests, "It’s just a little speck right now. It won’t even know if we got rid of it." Leia pushes him out of the way and stomps down the hall.

Chewie roars at Han again. "I know, I know" Han yells back at Chewie, as he takes off after Leia. As he enters the bedroom, Leia confronts him. "It’s about money again, isn’t it?" she yells. Han sighs..then begins to justify.."Well you know I don’t make much as a cargo runner, and you didn’t WANT me smuggling anymore…What about you? Aren’t you a ‘princess’? Don’t you have money, jewels to sell, all that kind of stuff? "OHHH!" exclaims Leia "Han, you KNOW my home planet of Alderon was destroyed when the Empire tested the power of the first Death Star! They didn’t stop and bring my wealth off, first! I can’t believe you are reacting like this! I thought you’d be happy!" "Happy?" Han looks at her in surprise.. "You said you LOVED me!" Leia responded, as she crumpled into tears, and began crying on the bed. "I DO love you!" Han insisted, as he sat beside her. "But I just don’t think I’m ready for this. "

Doesn't that sound terrible, coming from Han? Scoundrel or no scoundrel, I can't imagine him doing that to Leia! But I was amazed at how many women have told me this story!
Under Construction and coming soon: The Romeo and Juliet Saga, and the Jack and Rose Cruise to Conception.